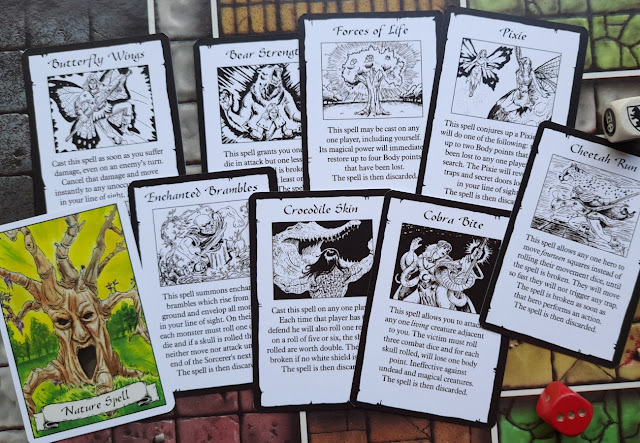 Here is an upgraded version of the Nature Spells. As many of you already know, this cards were intended to be used for a Druid character but a Wood Elf or a good Wizard can also feel comfortable in a dungeon if equipped with this set. The first version of this set was featuring 3 cards only: Bear Strength , Forces of Life and Pixie . As for the Elf Spells, this set is also featuring 8 cards. The player who select this set will chose three cards. In the Elf Quest Pack (as well as in the unreleased Wizard Quest Pack...) you can find new rules for spells selection. A spellcaster character may select this set instead of one of the classic Elemental spells. If this set is chosen, three of its cards must be selected. Anyway, I wanted this set to be more related to nature and animals, so I created additional cards to upgrade the set. I tried to assign an animal feature to each card: the speed for a cheetah, the dangerous bite of a cobra, the lightness of a butterfly, the rough skin of a
2 comments
Read more » 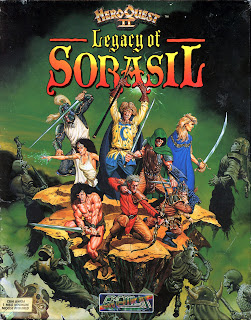 HeroQuest II - "Legacy of Sorasil" was the sequel for the HeroQuest videogame. It was published in 1994 only as a videogame for the Commodore Amiga and Amiga CD32 by Gremlin - link here . No official boardgame was ever released as a sequel or with this title, so I don't know if this was a Gremlin only project or if it was involving someone else from Hasbro staff but then remained an unreleased expansion as the Wizard and the Dwarf Quest Packs did. The game box had a stunning cover artwork painted by artist Staz Johnson , featuring the four classic heroes from the original boardgame, Barbarian, Dwarf, Elf (with a new haircut) and Wizard plus four new entries, Knight, Ranger, Cleric and Mystic (last two are female characters). (more of Staz Johnson art on DeviantArt or ArtStation ) Gremlin Archive website stores high quality scans of the individual artworks for four of the characters: Barbarian, Ranger, Knight and Wizard - link here I dropped a couple of comments there
1 comment
Read more » 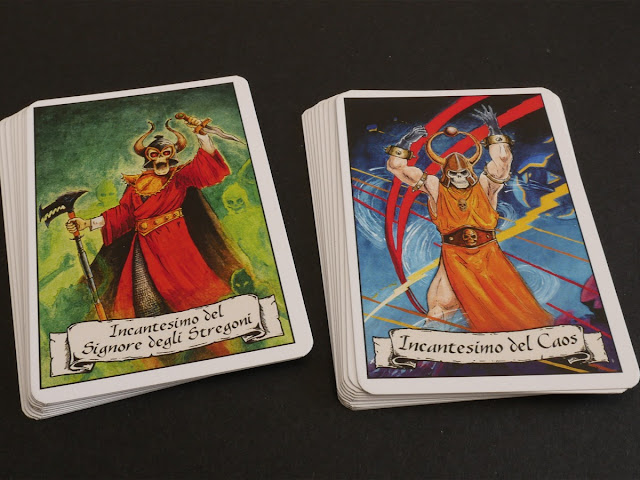 I finally managed to retire some of the custom cards I sent for the print! I made two different decks to try how they will look when professionally printed: the Chaos Spell in their Italian incarnation and the Witch Lord Spells (brand new set, I will present in another post). I love the vibrant colors on these ones. Card size is the same of the European 1989 version, mm 54x80. I wanted these cards to look very close to the style of the Wizards of Morcar cards so for the Chaos Spells are also using a custom artwork; the background recalls the original one from the American cards while the Chaos Sorcerer has a color scheme inspired by the Chaos Tokens featured in Against the Ogre Horde pack. The Chaos Sorcerer is also represented in the same pose of the Wizard Hero on the Legacy of Sorasil cover art. The cover artworks are made by Luis Octavio NB and since I didn't want to use anything from the original stuff, the title banners at the bottom were also re-drawn (by spevna_studio )
3 comments
Read more » 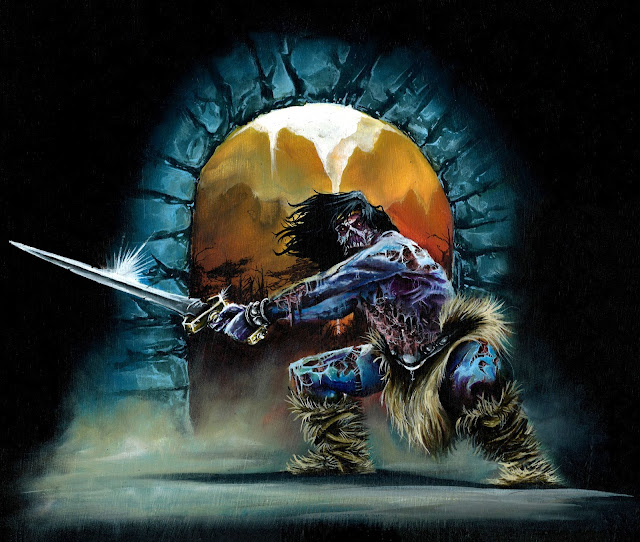 Zombie Attack! Just found this supercool Zombie Barbarian art painted by Wyrmwalk on a 11x14 wood panel as a tribute piece to the great Les Edwards Heroquest box art. He wrote he was a great Les Edwards fan and idolized him when he was a kid. Wyrmwalk is a lover of all things sci-fi, fantasy, horror, heavy metal, and 70s prog. We hope to see more of this in the future. Visit his website for more great art or follow him on Instagram at @wyrmwalk to like the picture. This picture will fit good as a cover art for a Zombie theme questbook.
Post a Comment
Read more » 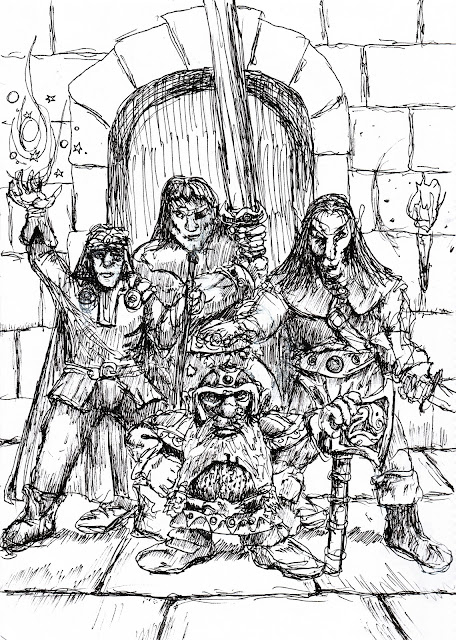 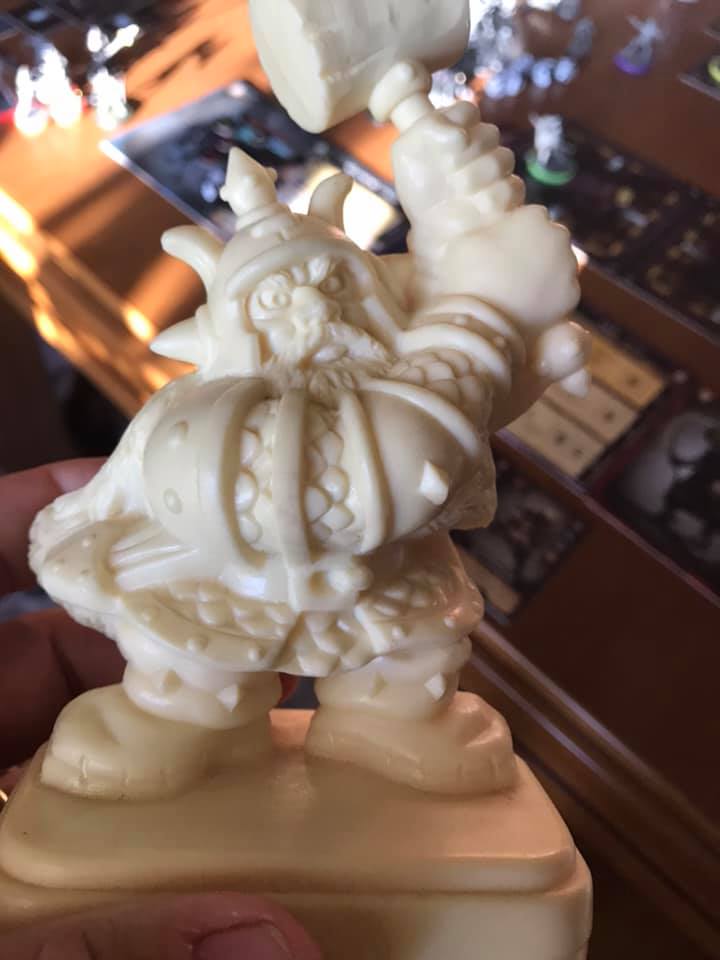 This is the last post about the models from the unreleased North American HeroQuest expansion. Since none of the figures below were sketched by Donald L. Kueker who confirmed he worked on the unreleased Wizard Quest Pack, we can guess the remaining figures were part of the Dwarf Quest Pack but nothing is officially confirmed (edit: they are now confirmed to be part of the unreleased Dwarf Quest Pack - "The Hammer of Hadrakka"). Some of them are probably (according to my tastes) the worst models of the four questpacks. There are both male and female dwarf, some kind of chinese dragon (it's a Carnivorous Caveworm), some kind of stone golem and a strange rhino looking creature (the Rock Mole). The male Dwarf could be a boss or a replacement figure for the classic Dwarf as well as the female Dwarf. Please note the male Dwarf was originally sketched by Rick Grayson, so it is also possible it was a leftout from the Barbarian Quest Pack (since both Dwarfs are wearing fur clothes
Post a Comment
Read more » 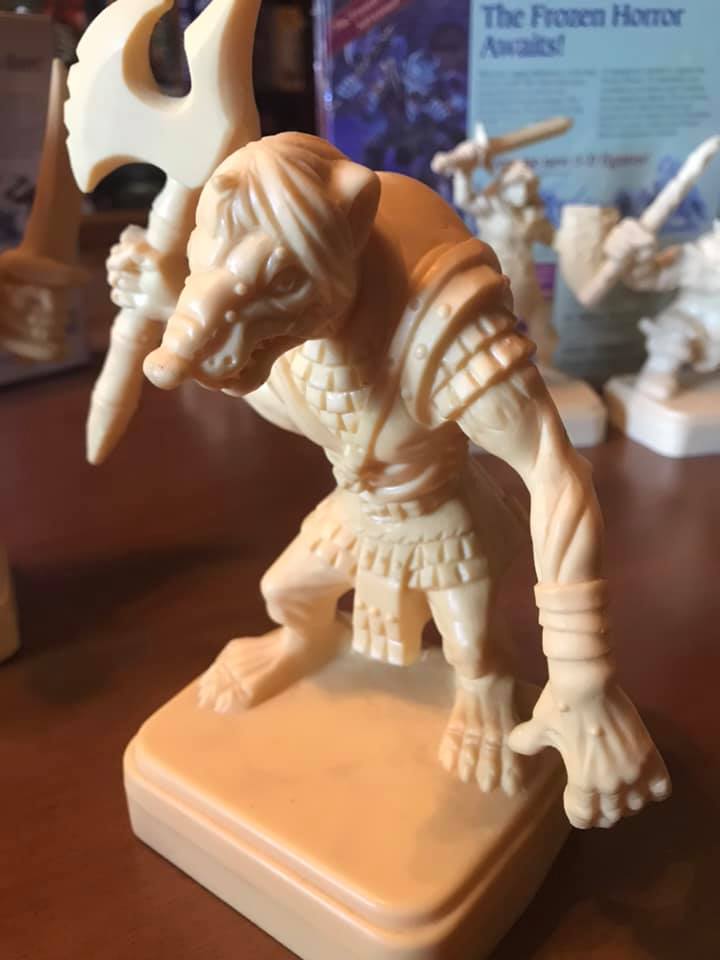 This is the first part of my posts regarding unreleased models and prototypes inspired by Rod Phelps (aka Skyknight) photos. In the previous posts I've shown you the 4ups sculpts for the Barbarian and Elf Quest Packs which are basically the prototypes of the models used to create the final miniatures. Years ago on Boardgamegeek and the Old Scratch Heroquest Forum there were rumors of unreleased questpacks for the Wizard and for the Dwarf. But first I would suggest to have a look at Toco 's website at http://tocoking.be where he reported his searches for proof of existence of the unreleased questpacks. While he was in search of an illustrator to paint a cover for a custom questpack, he get in touch with Rick Graysons, who painted the Frozen Horror artworks: "With patience he found out that The Frozen Horror was painted by Rick Grayson. Now Rick Grayson has shared with me a concept sketch of the Dwarf wearing a fur cape and wielding a hammer. He clearly stated that he did n
1 comment
Read more » 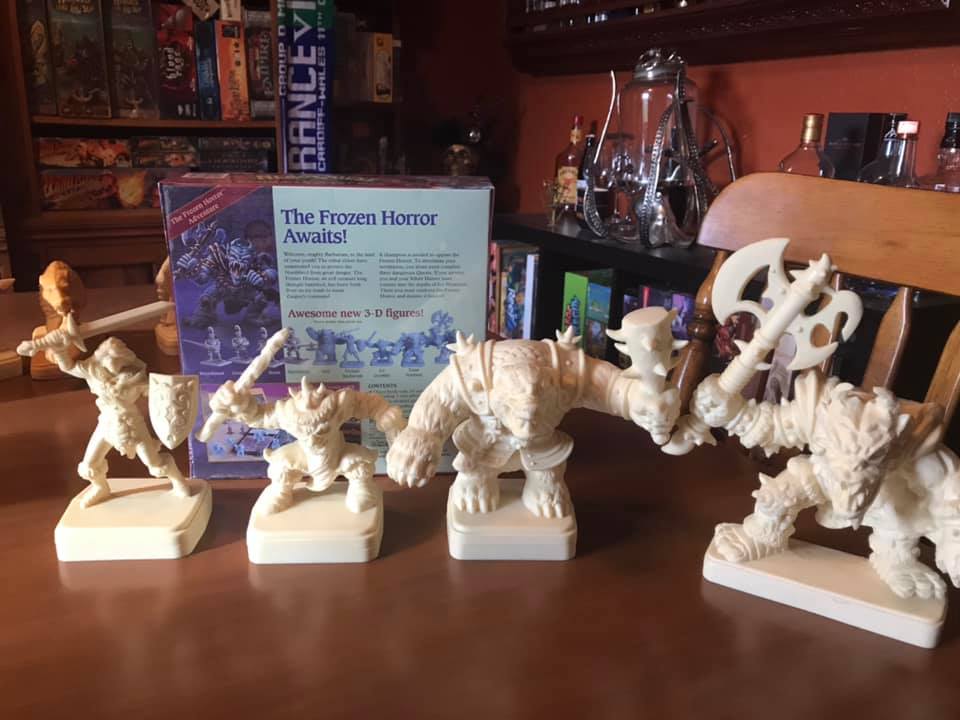 Following the previous post with the Elf Quest Pack prototype figures, here are the 4ups sculpt from the Barbarian Quest Pack, one of the two rare HeroQuest expansions released in North America and Canada only. The photos are taken by Rod Phelps (aka Skyknight ) who also owns the figures. You can notice from the images they are yellow and bigger than the original blue miniatures we get used to see. Rod posted some of these figures for the first time in 2010 on Boardgamegeek and explained as follows: "When companies make minis they used to make 3Ups or 4Ups. These were one of a kind oversized models that would then be sent down to the sculptors so they could have a larger specimen to work the detail into the mini." On another post, Rod also explained why the Yeti figure is missing from the set: "Glaringly obvious is the fact that the yeti is missing. Just before I got my hands on this, one of the wives of the employees got him because it reminded her of the bumble on Rud
2 comments
Read more » 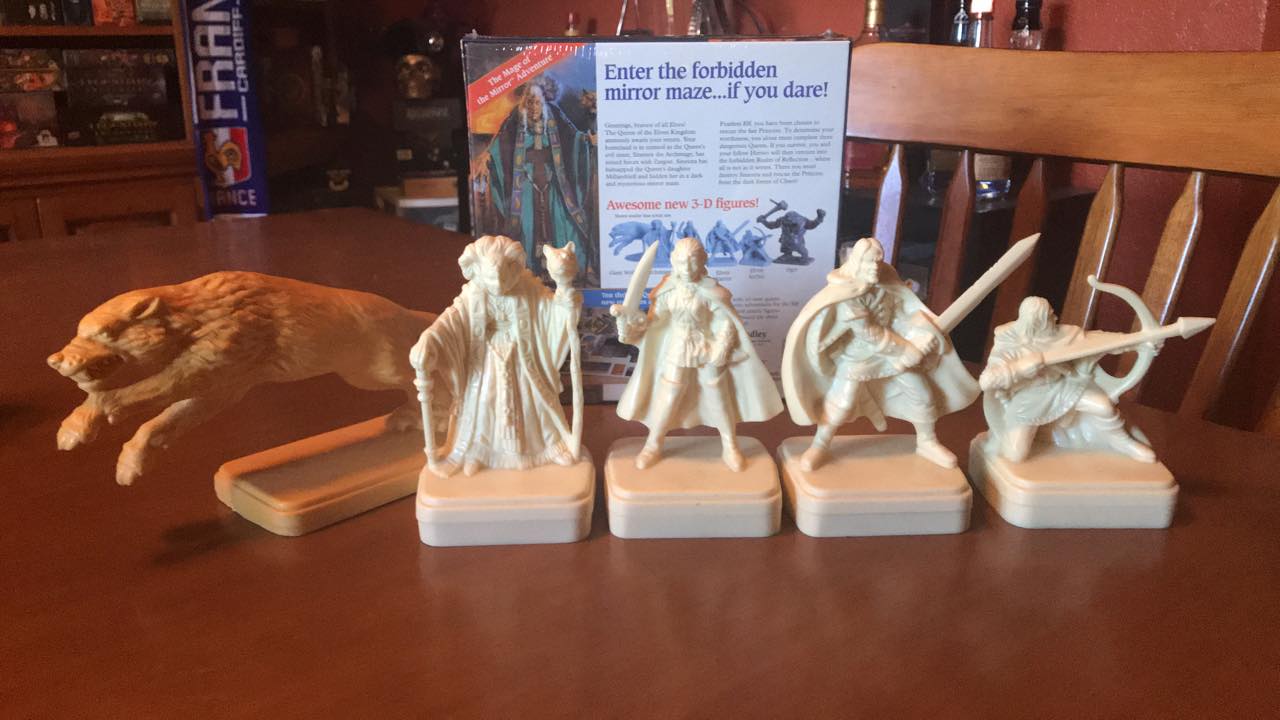 With this post and in the following ones I will try to group some interesting information shared by Rod Phelps (aka Skyknight ). For those of you who missed his posts on Boardgamegeek or Facebook, you must know he did some side-works for Hasbro back in 1990 when HeroQuest was still in production; through his work on Heroscape he became friends with some of those who worked on HeroQuest and eventually came upon these models. He also mentioned unreleased expansions like the Wizard and the Dwarf Quest Packs were not just rumors. When Hasbro (sadly) decided to discontinue the HeroQuest line, they destroyed almost all the copies of the game stored in their warehouse, leaving only one copy of each product for archive purpose. Employers were allowed to take some of the stuff for their own and Rod was the lucky one to bring home some of the pre-production stuff as well as some of the unreleased stuff. Please note: I asked Rod explicit permission to post his photos. "These are the origin
Post a Comment
Read more »
More posts